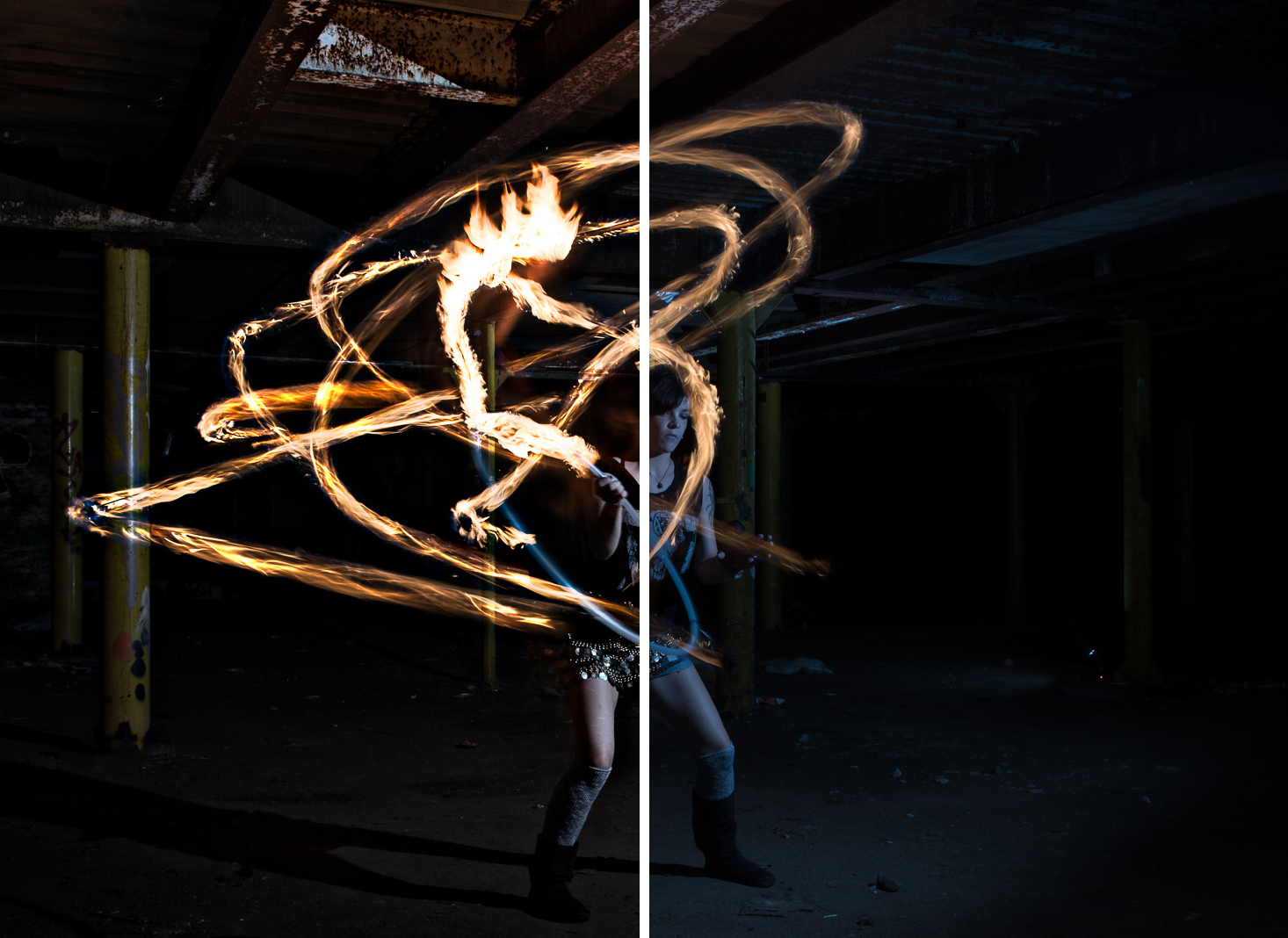 Making Fire in a Factory

This post discusses images from the shoot Fire in the Factory. Visit the gallery to view all finished images.

One of the people I’d met through rope and photography let me know that she was also a fire performer and would like to work with me to make some images of her art. She had a few friends who were also performers and would be willing to be safety monitors for the shoot. I’d never worked with fire performers before, so I was excited for the opportunity.

I knew I wanted to take my usual “environmental portrait” approach to the images and thought that our favorite abandoned factory would be a great setting for the images. We scoped out a few different spots in the factory and settled on three: an area with a lot of depth and yellow poles that I thought would complement the fire; an area with cool demon graffiti that, again, seemed like a good fit; and an area with a raised platform that would allow for one of her friends to also perform on the upper level while she performed below.

While the factory itself was fairly dark in many places, I still wanted to make sure I only captured some of the ambient light, and wanted to control most of that based on the flash. I also knew there would be a lot of movement in the shot over a long shutter speed, so I knew I wanted to avoid a shallow depth of field in order to ensure the performer was in focus when the flash fired regardless of where she had moved in the frame.

Putting all that together, these are the settings I used:

If you’d like to know more about rear-curtain sync, this video may help:

If you’d like to know more about balancing ambient light with flash, this video is very helpful and introduces the handy concept of the “exposure diamond.”

For the actual shoot, my process was to first get the framing and angles set the way I wanted them, then to add flash and make a few test shots to confirm the light was balancing well in camera. Once that was set, the performer would do a quick test with the fire so that I could tweak any shutter speed or aperture adjustments. When everything looked good, we gave her a general “box” of movement she should try to stay within, turned on her music of choice, and then just let her do her thing.

Because these were 1 second exposures, I didn’t really try to capture any specific moment. I basically just kept shooting as quickly as my flash units would recycle and hoped to catch some images where the performer was in a good position or pose and not too obscured by the light trails.

We would occasionally give some direction on positioning, but for the most part, we just let the performers perform while we captured as much as we could. You can see that in action in the videos below.

You can get a good sense of what the ambient light was actually like from the images below. The small aperture and low ISO brought some of that down to allow for the slow shutter speed and flash without letting anything get too bright.

You can also get a sense of how I was framing and my actual distance from the performer. (There’s also a shot of one of her friends with a fire safety blanket ready to go in case anything went bad. A fire extinguisher was also ready at his feet.)

I always start by culling my images to identify the best before I start editing:

Once I’d selected the images I planned to use, my priorities for the editing itself were:

With that in mind, and given the grungy setting of the abandoned factory, I knew I would be adding a good amount of contrast, clarity, and texture to the edits. I also knew I’d be adding some layer masks to add more exposure and “punch” to the fire trails specifically.

Below is a basic back-to-back before/after comparison:

And this progression shows you the major editing steps I took on each image:

Here’s a direct before/after comparison for that image:

I had a really great time with this shoot. Fire performance is definitely fun to shoot and edit, and the results are eye-catching. I hope to do more of this type of photography sometime in the future.