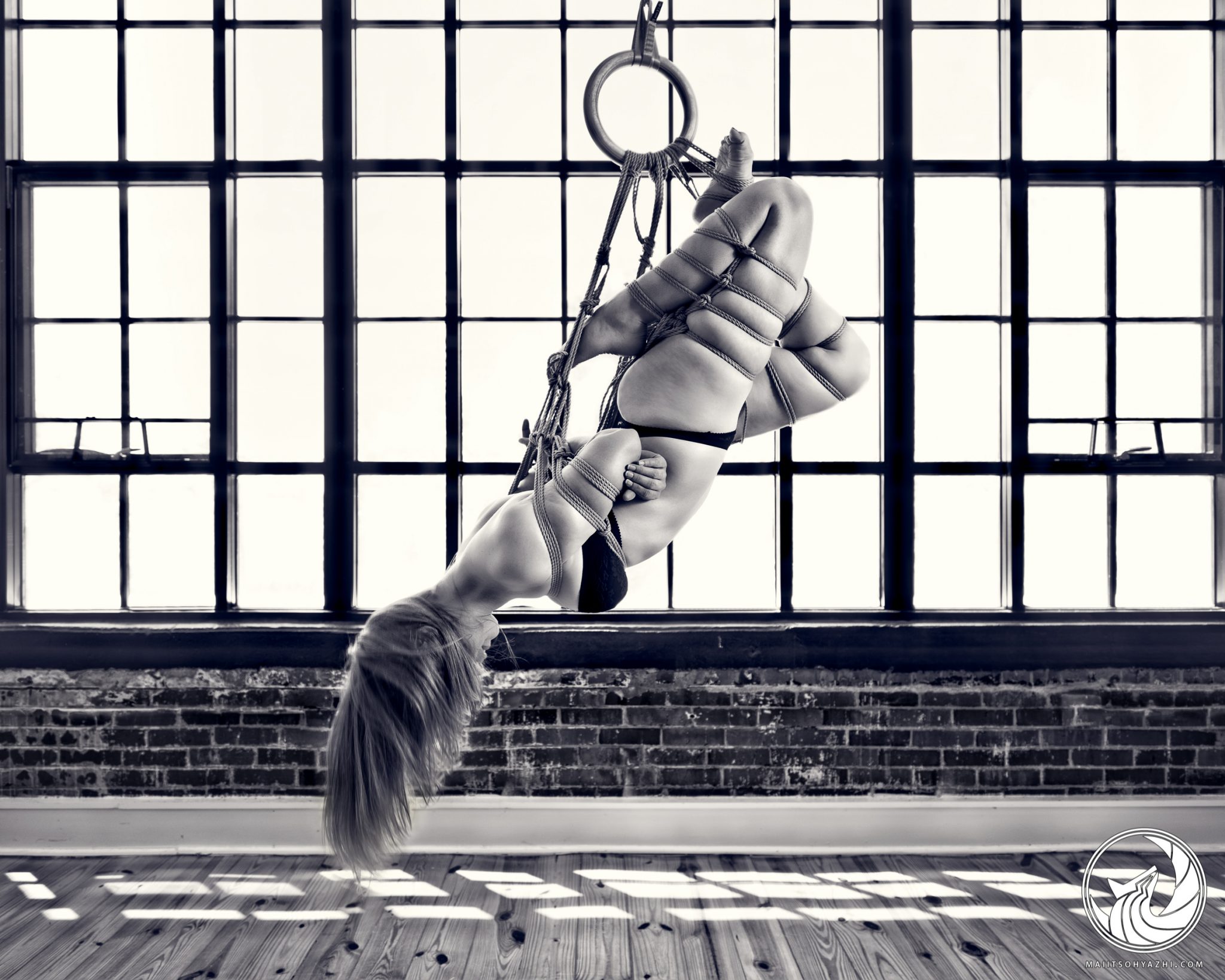 Hi! Will you suspend me?

Quick disclaimer: this writing isn’t in response to any specific event. I’ve been working on it for a while, and I feel like there’s no good time to post this because it might make someone think I’m posting in response to something in particular. I’m not, I promise. I just felt it was past time to do so.

I often have people ask me if I’ll tie them up. Actually, they usually ask me if I’ll suspend them. And I’m truly honored by the request. And I can understand why even people who don’t know me might ask: I lead the local Rope Bite group, I have photos of rope work on my profile, and I (think) I’m known as a pretty safe and trustworthy person in the local community.

So, I’m flattered by the request, and I don’t mean to make anyone feel bad for asking that, but … that request usually makes me uncomfortable, even though that discomfort is often hard to explain in the moment. So I wanted to try to clarify my thoughts on this, explain some of the sources of that discomfort, and have a place to point people that explains my response.

Suspension isn’t the end goal of rope work, it’s just the most risky.

My biggest objection is to the request to suspend someone I’ve just met. There are lots of reasons why I will probably say no to that.

First of all … rope suspension isn’t like a ride at an amusement park. You can’t just hop in the seat, pull down the safety harness, and enjoy the ride.

Rope work, particularly rope suspension, is edge play. It’s not something to be taken lightly. This stuff was originally designed as a form of punishment and torture. It’s not a question of whether or not you might get hurt. The only question is “when will you get hurt, and how badly?” Ask any experienced rope bottom.

If you see me at an event suspending Bound_Light, you’ll probably see me putting her into difficult suspension positions, and you’ll see her smiling or looking blissfully peaceful or concentrating on working through the pain. What you might not see is how I check in with her, how she checks in with me, or the many subtle ways I monitor how she’s doing. And you definitely don’t see the time we’ve spent together in private, practicing ties, learning how we react to issues that come up in suspensions, learning to communicate. Or the time that she’s spent learning how her body reacts in rope, learning to process the pain, so that she can make informed decisions about which risks she’s willing–and not willing–to take. That time, and that level of trust and communication, is a prerequisite to informed and enjoyable suspension play for us.

And if that’s the case, then I could really hurt them … and not the fun kind of hurt. And that’s a violation of my consent … because I do not consent to hurt anyone in a not-fun way, and I also don’t have the lucky ability to read minds, and so I rely on their communication as half of that consensual agreement to tie them.

So, for all those reasons, I probably won’t do any suspension work with someone if I don’t know them well.

The Special Dangers of “New”

All of those points are doubly-true for new rope bottoms. I think it’s easy for bottoms new to rope to see cool ties and suspensions and to want to do those things and have those experiences. I suspect the thinking often goes something like: “I don’t need to know the ties or anything, I just need to find someone who does and let them tie me up.” And so, some new bottoms end up in challenging suspensions with no real sense of the dangers involved.

New bottoms likely have little to no understanding of how their body reacts to rope and the added stress of suspension. Therefore, they have no way to know what reactions are normal or the degree of risk they’re taking based on those reactions. They also likely don’t know how to communicate in rope, or even what things should be communicated. And, if they’ve just met the top, then they have no communication protocols or rapport established with that top. They likely also don’t know how to successfully negotiate a rope scene, or how to assess for themselves whether or not the rigger has the necessary skills for the type of tie they’re going to be doing, or how to judge for themselves if the anchor point is adequate and the condition of the ropes is acceptable, etc.

But even though I’m focusing on the bottom here, when something like this does happen, the blame lies mainly on the top, if that top is experienced (which I’m assuming they are, if they’re doing suspensions). It’s natural for people new to rope to want to rush into suspension. That’s what all the cool kids are doing, and that’s what’s in all those flashy rope pics. But it’s up to experienced members in the community to temper that excitement with education and to help lead them in a safe progression.

So, for all those reasons, I probably won’t do any suspension work with someone if they’re new to rope. It’s not personal. Or, maybe it is personal, but in a positive way: I want their consent to be informed and don’t want to encourage uninformed risk-taking in rope. And I want them to enjoy rope and go on to continue exploring it in a manageable progression … not in a way that could get them injured before they truly understand the risks or how to mitigate them (notice I didn’t say “avoid them”) … and not in a way that could turn them away from rope.

And so, I’m thinking about all of these things when someone approaches me and asks if I’ll suspend them, and that’s why the answer is probably no.

But I say I “probably” no because, during a rope-themed event (like a Torture Garden or All Tied Up event, for example) or during rope practices or something similar, I may choose to work with people on some types of ties, some of which involve suspension. But again, the extent of that depends a lot on their experience level and how well I know them.

For example, I feel confident that most people can safely sit into a hip harness, or lean back into a hip-harness-and-arms-free chest harness without too much worry (assuming it’s tied well and secured appropriately by an experienced rigger on a body-aware bottom). But unless I’ve known them for a while and have seen them working in rope, I won’t go beyond those kinds of basic-level, mostly-safe suspensions. And even then, it will be in a learning context—controlled and for the purpose of practice and gaining experience.

Instead–and particularly if they’re new to rope–I’d rather start by just exploring how they respond to being restricted in the kind of rope I tie, and so I’m much more willing to tie a futomomo or TK on someone I’ve just met when we’re just going to be sitting on a mat. And it makes me happy to help people learn more about rope and how various ties feel when tied by a different person and how their body might react to those ties. And I’m learning, too, as I encounter different reactions, limitations, interests, and ideas. And that can be much more rewarding than a brief, painful, uninformed suspension session.

And anyway, as I said above: suspension isn’t the end goal of rope work. It’s just the most risky.

There is one final factor in my decision about what I will and won’t do with others in rope. I’m currently in a monogamous relationship with Bound_Light. For us, at this point in that relationship, that means we are monogamous in our “play” in the same way that we’re monogamous in the other sexual/romantic aspects of our relationship. So, if I do tie someone else, it’s not “play.” At least, not in the usual way that term is used in the community. Meaning, it might be fun or educational or good practice, but it’s not sexual or romantic.

You may see us tying other people, but those ties aren’t “play” … we’re either practicing, or learning, or teaching, or helping someone learn to understand their body in rope, or doing something for a photo shoot, or something like that. And we’ve discussed that thing in advance and given each other permission to do that.

Many people have more open relationships, particularly in regard to play. And that’s fine with us–we understand and respect that, and certainly have no judgment about it. But that’s just not what our relationship is right now.

But I’m not saying …

This is definitely not meant to discourage anyone from asking me to tie them. If you see me at rope practice or at an event, particularly where I am tying others, please feel free to ask if you’re interested. Similarly, if you’re planning a rope-themed photo shoot and would like to work with me on that, please share your goals and ideas with me. I would be truly honored and flattered by the request.

I obviously have opinions about what’s wise or unnecessarily risky, and I share those opinions out of a sense of obligation to the rope community. But I’m not the rope police, and we’re all adults here, and people will mostly do what they want, anyway. I’m just explaining my perspective.

But, if you do ask me to tie or suspend you, I hope you will also understand if I insist on discussing your experience (and give you time to ask about mine) and limit the types of ties I’m willing to do based on that discussion. I also hope you’ll understand if I politely refuse. I don’t want to hurt anyone’s feelings, I don’t want anyone to take that “no” personally, and I definitely don’t want to discourage anyone from exploring and learning more about rope.

I just want to promote the safer, informed exploration of rope, and I want to respect my relationship as I do so.