Reflecting on the Beginning

This is one example of a “Behind the Scenes” post. Patrons at the “Behind the Scenes” tier get access to all posts of this sort. Some focus on the photography, like this one. Others on the rope, the general workflow, or other aspects of the work I post on this site. Interested in joining? More info here.

I’ve had a camera in my hands since I was a teenager, but it wasn’t until 2013 that I started to try to make “photography” that included people. Before that, I’d been focused on nature and travel photos, and people only appeared when taking snapshots of friends and family.

My first real year of trying to create “model / fine-art nude / kink” photography was 2014, and it’s … interesting — in a somewhat-cringe-inducing way — to look back at that first year.

Here are some observations and things I’ve learned from that reflection.

But first, I want to acknowledge how lucky I was to have someone in my life willing to let me learn with them. I started dating Bound Light near the beginning of my rope and photography exploration, and learning both with her as my partner has been a huge part of whatever success I’ve found in those pursuits.

Apart from early shoots, she was the only person I consistently shot with during that first year of real learning, and given that we’ve been together ever since and are now married, she continues to be my primary subject and muse. Having someone to learn with — and they don’t need to be a romantic partner, just a willing friend — is probably the best resource anyone can have starting out.

Too Much Skin Softening

When I first started posting these kinds of images (exclusively on Fetlife back then), a friend who is also a photographer tried to kindly warn me that I was overdoing it on the skin softening. And I actually did back off the skin softening some as a result. The problem was, I was so overboard with it that even the backing off didn’t help much … but I thought it looked great!

Looking back … I mean, some of them could maybe pass as “painterly,” but mostly it’s just plastic.

The before/after below not only shows the difference in skin softening, but also previews the “too much light and color manipulation” problem coming up next!

More examples of too much skin softening:

So, to my photographer friend who tried to warn me: thanks for the advice, and sorry I didn’t listen earlier!

WHAT I DO NOW: I don’t do any skin softening anymore. I’ll remove temporary blemishes (or permanent marks for those who are trying to protect their anonymity), and I’ll even out skin tones, but I don’t touch overall texture anymore. To make those fixes, I typically use the healing brush, sometimes the clone stamp tool (low flow), and when I really want to pay attention to skin, I use frequency separation layers.

Too Much Light and Color Manipulation

Some of my early influences included photographers who made very bright, airy photos, often with an overall pink, purple, or soft yellow tone. In trying to emulate that look, I did what most beginners do: I overdid it.

Thankfully, only my earliest work was cringe-inducingly overdone, but over the years, my preferences have generally shifted to darker or at least more balanced exposures. More specifically: I’ve come to appreciate the value of shadows.

I do like the feel of the “Pigtails in Pink” image (left) and the overall light and airy feel of the “Kitty” series (right), but my hand is too heavy in all of these. Maybe someday I’ll go back and “re-process” more images, but there are always new ones to create …

Below is the best example of how much I overdid it at first. It’s an image from the “Books at Sunset” shoot as I originally processed it back in 2014 (and have since re-processed). Yikes! 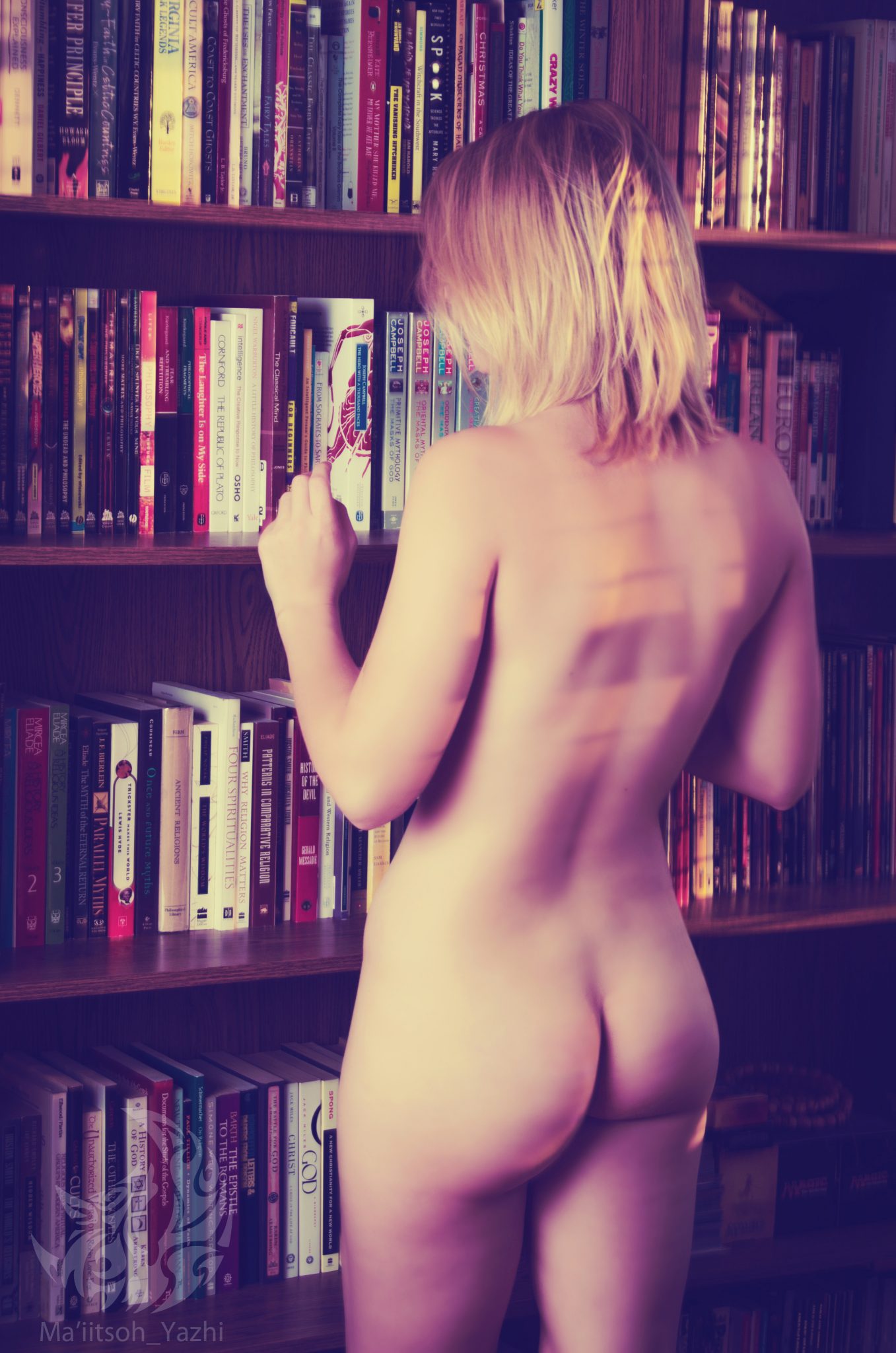 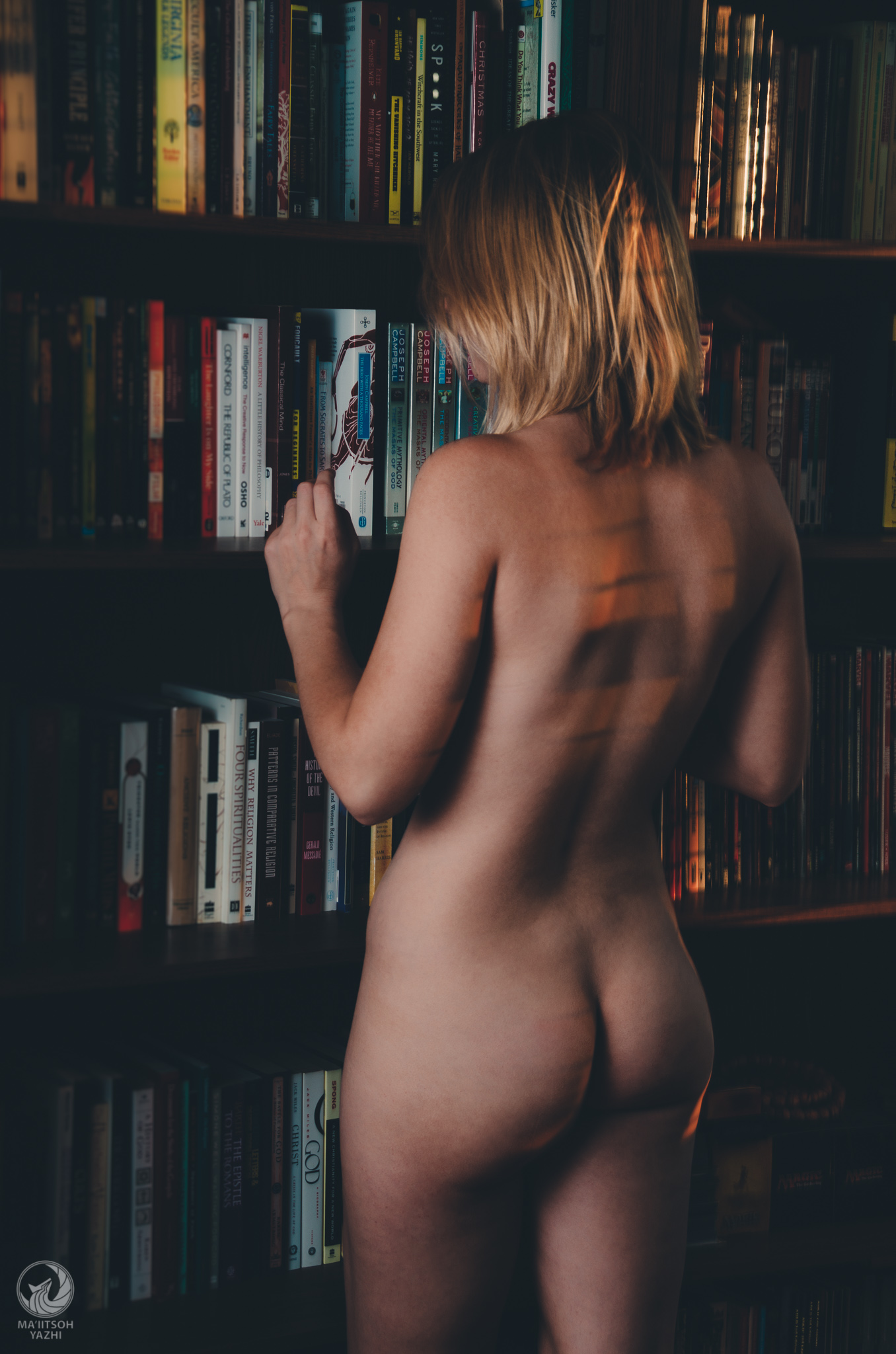 WHAT I DO NOW: I will still happily shoot bright and airy, but now only when the subject and purpose fit the style … and hopefully with better control and execution. Because I know my camera is better at recovering shadows than highlights, I often shoot somewhat dark and change the light as needed in post. As for color, it’s a pretty wide mix of tools: HSL manipulation, RGB curves, split toning, masked layers, etc. My eye is focused first on skin tones, then on greens and yellows, then on the overall tone.

For travel and landscape, I usually hung out somewhere between f/16 and f/22, with the occasional “f/8 and be there” approach for the limited street shots I did. And in my earliest kink/nude shots, I mindlessly kept that high aperture. You can see it in the sharp focus of the books in the first shot below. Compare the difference to a shoot from a few years later.

But I pretty quickly realized that mistake and started making a new one: shooting wide open all the time (you know, for that portrait/blurred background look). This was probably also influenced by the desire to imitate the “bright and airy” look.

As a result, I would often miss focus or just not have enough depth of field to keep as much of my subject in focus as I wanted.

The biggest problem in the above image is the lack of a clear or intentional focus. The most “in focus” section is probably the panties … which is definitely not intentional.

When a body is positioned like this — basically parallel to the focal plane — you’d typically want enough depth of field to get the entire body in focus (unless you were intentionally and obviously drawing attention to a particular detail … which would normally involve different framing anyway).

When I made this image, I remember liking the pose, some of the rope (that wad between chest and leg is pretty ugly) and the colors. And because my aperture was too wide, this was the “most salvageable” of the images I shot.

(The second biggest problem with this image is the aggressive skin softening!)

The Switch to Full Frame

I completely believe that it’s possible to make great images with almost any type of gear, and certainly with any modern camera (including many recent phones). However, I also credit my switch to full frame (Nikon D750) with helping me take a big step forward in my photography.

When I was first learning photography, I shot film (most of it on a Nikon N8008s), and I did find the images coming from my new full frame sensor to feel more “familiar” to me than the ones from my old crop sensor. And because I found myself liking those “straight from camera” shots better than the ones from my previous camera, it also motivated me to do less work in post-processing.

So, while I don’t believe you need any particular gear to make great photography and think that many people get “better” gear well before they need it or are ready for it, I do think that particular move for me, at that time, was helpful.

The images below are from my first shoot with the new full frame (Tied in the Mud):

Backing Off the Processing

By the end of that first year of shooting people, I was finally learning to do less processing … particularly skin smoothing and excessive manipulation of color. It wasn’t an instant switch … the improvement continued for the next few years, and I still look at images from just last year and think “overdone.” But I can see the change starting by the end of 2014.

If I were to give myself any kind of “pass” on my early shots, it would be for composition. I think my past experience shooting landscape and travel did help me to train my eye.

I’ll add a caveat to that, though: I definitely shoot more “environmental portrait” than anything else. That landscape/travel background means that my default approach is to situate the subject within the environment and capture (or at least imply) the environment as well as the subject.

I still have to remind myself to “get closer” and purposefully think about angles that take best advantage of the subject — instead of both subject and environment — but I’m making progress there, as well.

But within that limitation, I think my framing has been strong from the beginning thanks to my earlier film shooting. Nothing’s ever perfect, but I think it was the one solid footing I had when I started down this road.

I continue to work to improve all of these aspects, being purposeful and thoughtful about my composition and framing, deliberate about the exposure I capture with a mind towards what I want and am able to do in post-processing, and careful not to overdo my processing once I’m back in front of the computer.

I still make many mistakes and am my own worst critic, but I try not to continually return to previous work because there are always things I’d want to change and improve. However, that impulse is also a good sign: it means I’m continuing to learn.

And if I do find myself getting too critical of my past work, I remind myself that all of this, in the end, is a privilege and a pleasure to be enjoyed.

Join the Newsletter | Support the Work